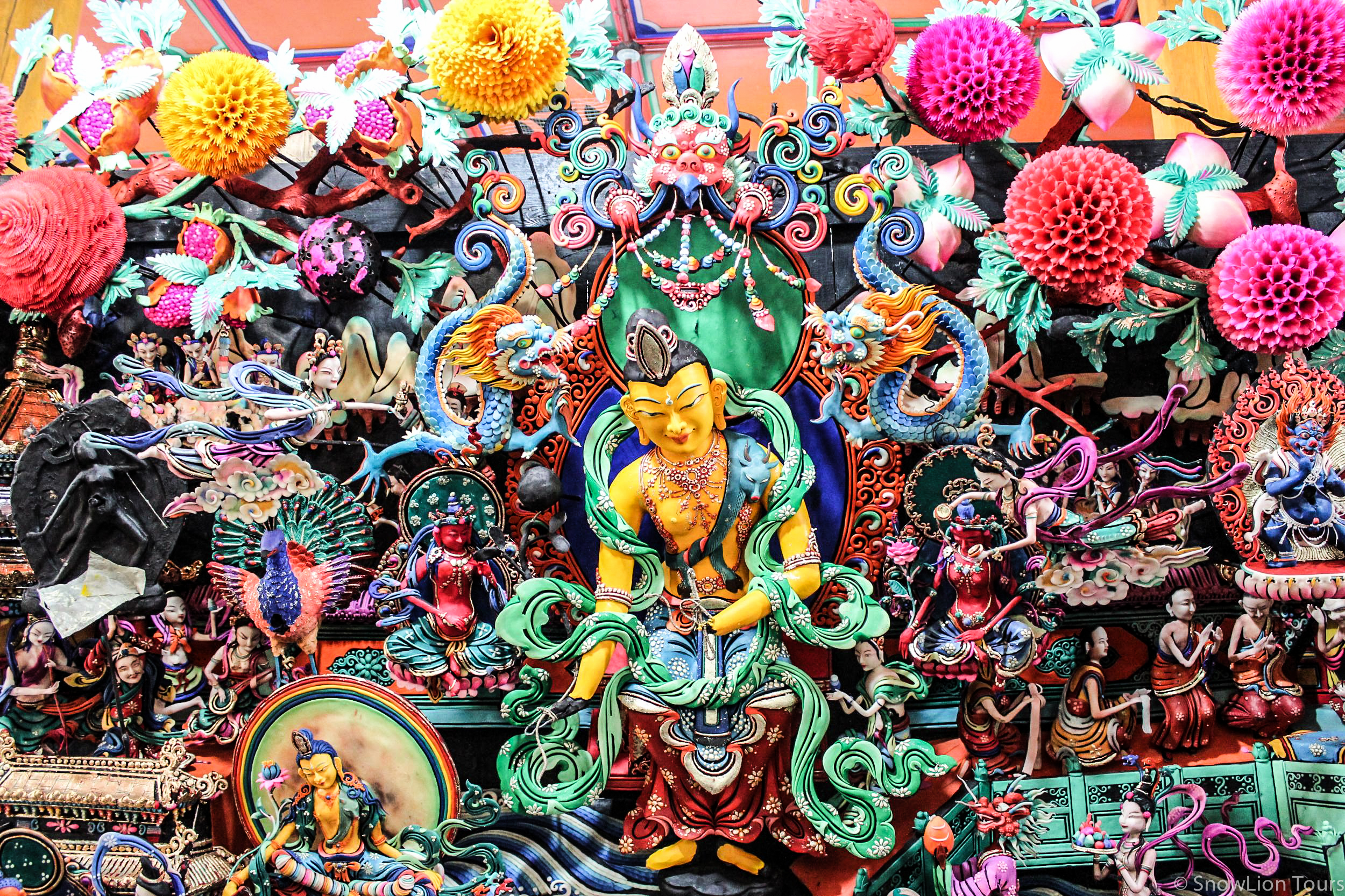 The Tibetan year is based upon a lunar calendar of twelve months, with the New Year usually beginning sometimes in February. Each month consists of thirty days, with the full moon on the 15th day and the new moon on the 30th day. The majority of Tibetan monasteries will have tshok, “offering ceremonies,” for the Medicine Buddha, pame, and Sakyamuni, respectively, on the 25th day there is an offering on the Khandroma. On the 10th day of every month the Nyingmapa sect celebrates special Guru Rhimpoche days, the important of these being in the sixth month to commemorate his birth.

The Tibetan New Year is reglemented by the systematization of the Tibetan calendar in 1027 and follows the Chinese New Year. Before that, the year started in Tibet with the blossoming of the peaches. On this day, families unite greeting with the auspicious “tashi delek”.

Following the Tibetan New Year, this is the greatest religious festival in Tibet. It was instituted in 1409 by the founder of the Gelukpa Sect, Tsongkapa. In Jorkhang monks from the Three Great Monasteries of Tibet assemble to pray to Sakyamuni and hold philosophical debates among candidates for the Doctorate of Metaphysics. From all over Tibet pilgrims come to pray and donate to the monks. The festival lasts nearly two weeks.

The last day of the Great Prayer Festival celebrates the victory of Sakyamuni over non-Buddhist opponents. The festival was established by the Lord of Neu Dzong in 1409 with the illumination of countless butter lamps.

Every June, people from all over Tibet gather in Gyantse for horse racing, archery and barter trade. In modern times, ball games, racing, folk songs and dances were added. While horse racing and archery is popular all over Tibet, Gyantse is proud of being the oldest such event, being started in 1408.

On this day, the Gods in heaven are said to descend to earth. Huge amounts of incense is being burnt. Many people go for a picnic in the parks.

The day that Buddha gave his first sermon is celebrated with visits to holy mountains.

Held in August or beginning of September, the “Opera Festival” is one of the greatest festivals in Tibet. During seven days, opera performances and contests are held. Since the 7th century, Norbulingka was the centre for this festival.

When the sacred planet Venus apears for a week, all the people from Lhasa bath in the river, since it is said that the water becomes pure and can even cure disease.

In memory of the great reformer of Tibetan Buddhism, his death on that day in 1419 is still remembered. People burn butter lamps on the roofs and pray. In the evening, Tibetan dumplins are served as supper.

At the end of the Tibetan year, religious dances to drive off evil spirits are help in monasteries all over Tibet. Every houshold burns bundles of straw and throws rubbish on the streets. The Year-End-Dumpling is served for supper.